Welcome to iModulonDB! This is a web-based tool for accessing a database of transcriptomic dataset decompositions. If you are a biologist interested in what machine learning can tell us about the regulation of bacterial gene expression, this site will provide very valuable tools for you. 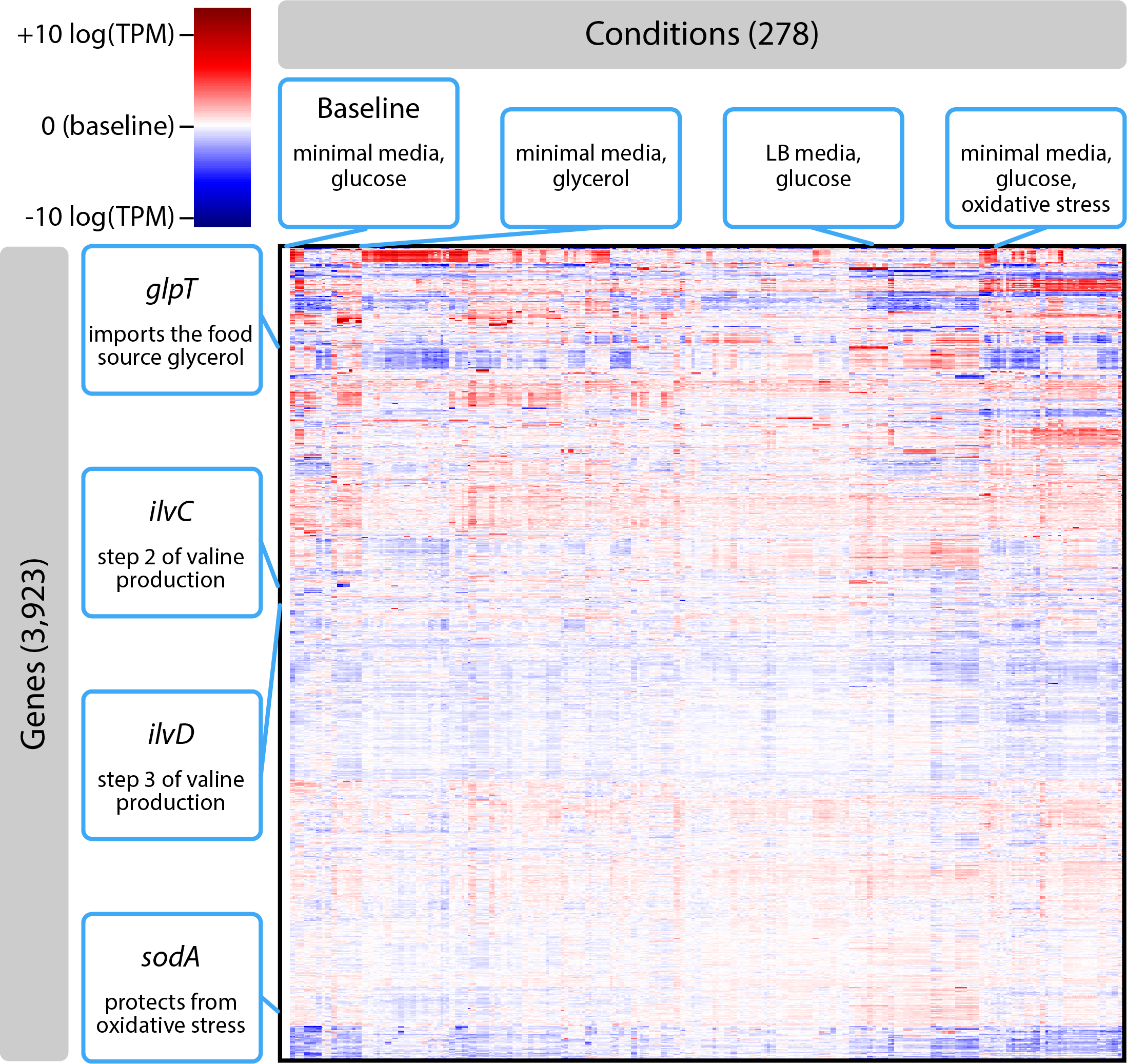 This is a transcriptomic dataset. Each column represents an experimental condition that cells were subjected to, and each row represents a gene. Each element is an expression value indicating how active the gene is under the given condition. This dataset has been normalized such that the entire left column, representing the baseline condition of simple growth on glucose, is zero (white), and positive and negative values in other elements indicate that the gene is more or less expressed than it is in the baseline.

All living things need to adapt their gene expression to the situation that they are in. Genes encode proteins that perform necessary functions, like consuming a specific food source, synthesizing a required building block, or responding to stress. For example, the gene glpT is used to import a specific type of food, glycerol. We can find its row in the dataset and see that when glycerol was in the cell’s media, this gene was upregulated - the cell figured out that this gene was helpful under this condition, and adapted to use it. One of our goals at the SBRG is to understand how and why genes are regulated the way that they are. We are specifically looking for patterns in this type of dataset that give us valuable insights.

Each of these plots represents a row from the dataset as a bar graph. We show two related genes: glpT, which imports glycerol, and glpA, which helps break down glycerol. The x axis labels are names given to the various projects in which the samples were collected (for example, ssw stands for "substrate-switching", in which we switched between various substrates). Hovering over the tallest bars reveals which conditions cause each of the genes to be upregulated. You will notice that in both graphs, activity is highest when glycerol is the carbon source. It would be convenient to treat both of these genes as part of a single glycerol-consumption unit in the transcriptome - the goal of our approach is to find all such units with unsupervised machine learning.

Applications of this Knowledge

By running the ICA algorithm on a transcriptomic dataset (see our github), we generate a set of iModulons. Each iModulon is a group of genes that represents an independently modulated signal, which the cell is probably controlling using the same or related regulators. Mathematically, an iModulon has a weight for each gene and an activity for each condition. The highly weighted genes are iModulon members, and the highly active conditions are those that the iModulon is likely performing a function in. We characterize an iModulon by interpreting its gene members and activity levels. For example, the glpR iModulon contains all the genes that are associated with digesting glycerol, and it is active when glycerol is present in the media. We named it 'GlpR' because that is the name of the transcription factor that co-regulates all of its genes. 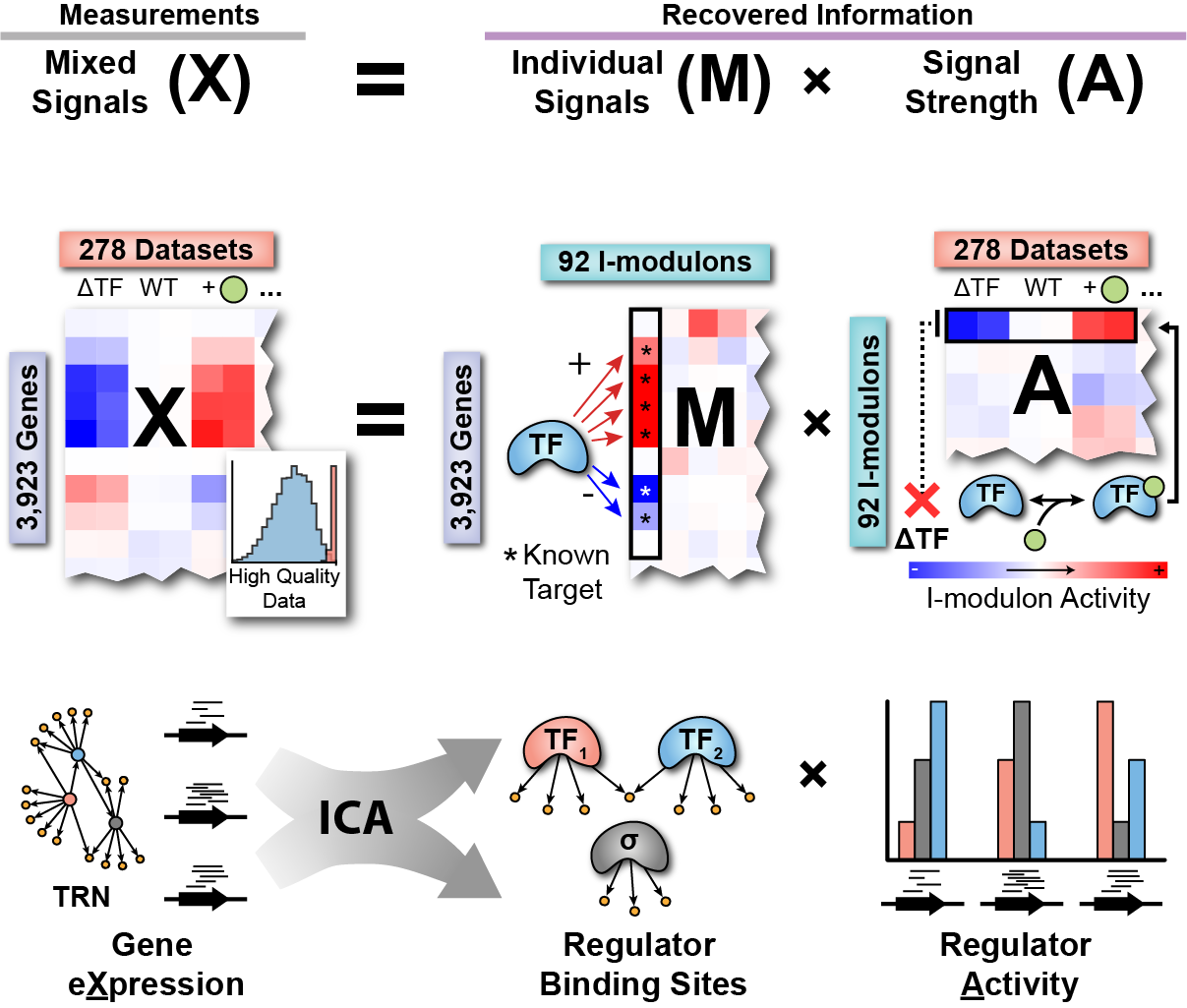 X: Original transcriptomic dataset. We make the assumption that the X matrix results from a mix of underlying signals (iModulons) controlled by regulators like transcription factors (TFs), and we use the ICA algorithm to identify those signals.

M: Links genes to iModulons. A gene that is highly weighted is said to be a “member” of the iModulon, and all iModulon members are expressed as a group. If the iModulon is a sports team, the M matrix defines who the players are.

A: Links iModulons to conditions. If an iModulon is highly active in a given condition, it is probably carrying out a function that is important in that condition. If the iModulon is a sports team, the A matrix describes its playbook.

Where does ICA come from?

ICA was originally developed in the 1980s to solve the blind source separation problem, also known as the cocktail party problem. Imagine you place microphones around a crowded, noisy room. Each microphone would pick up different combinations of each speaker. If we apply ICA to the resultant set of recordings, we can identify the original source signals (M) without any other information. In addition, ICA infers the volume of each source in each microphone-measured signal (A).

Similarly, a transcriptomic dataset acts like microphones into the cell, measuring the combined effects of different transcriptional regulators with various condition-specific activities. The regulators/iModulons are behaving independently in the cell, the same way that the people in the room behave independently.

What is a regulon, and how is it different?

The purpose of this site is to share the powerful top-down approach of ICA with other systems biologists and microbiologists. We hope that searching for the genes and functions relevant to your research will point you toward iModulons that expand your understanding of which genes are most important to your application. We are currently working on decomposing additional datasets to compute transcriptional regulatory networks across many organisms, which will advance our knowledge significantly in the age of big data.

To use this site, select your favorite organism from the list on our home page. This will take you to a dataset page, which contains a list of the iModulons we have computed and characterized, as well as the publication in which we describe the set. Click on a row in the iModulon table to see its dashboard, where you can learn about its gene members, activity, and regulator enrichments.

Alternatively, select 'Gene Search' from the dataset page and type in your genes of interest. This will bring you to a similar dashboard, listing the most relevant iModulons for your gene. Note that some genes are removed prior to running ICA if they are never expressed or shown to be extremely noisy within conditions; if that is the case, your gene will not show up in our search.

For a description of each of the figures shown on the iModulon dashboards hover over the various components of the example “MalT” iModulon below: 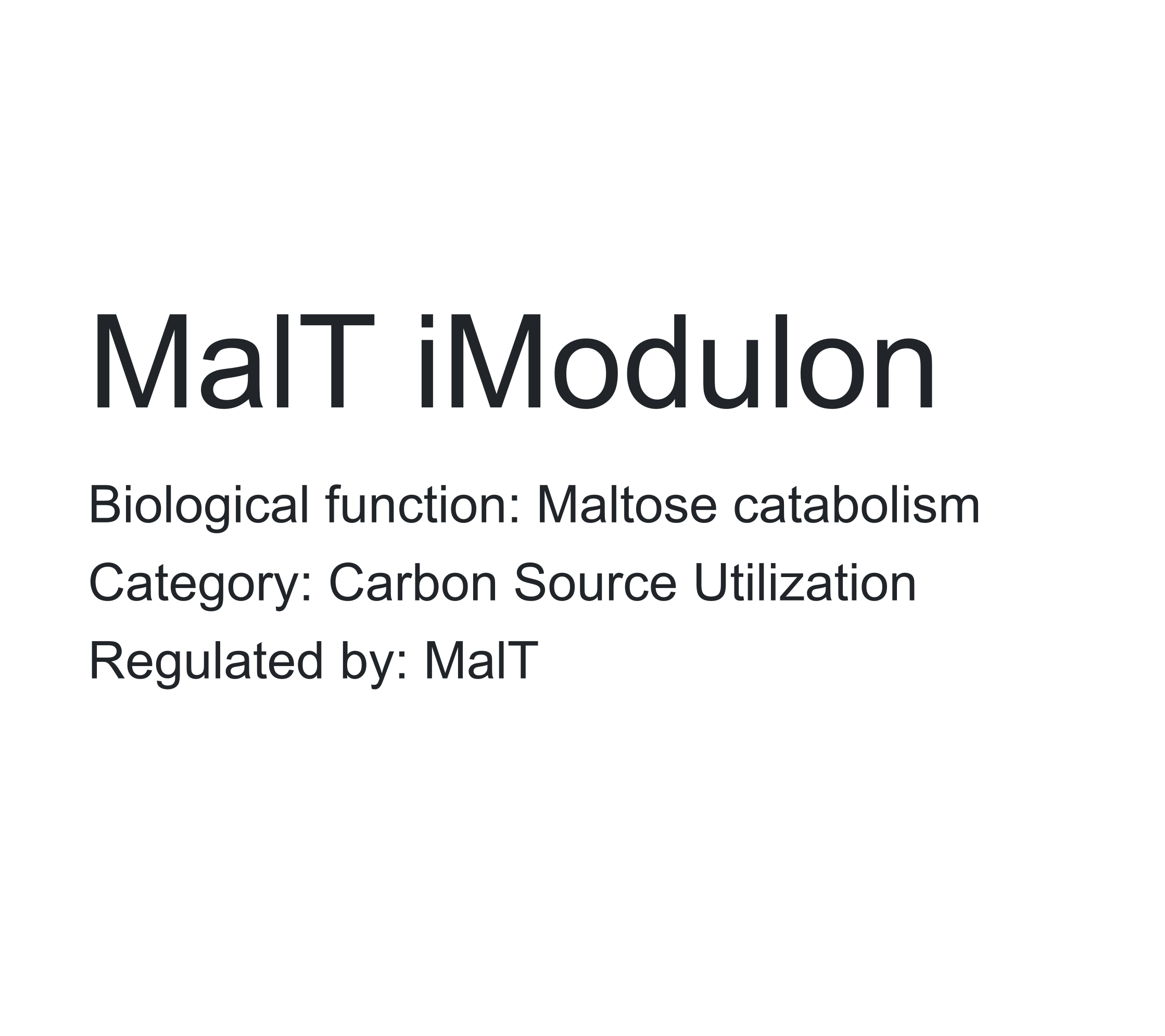 Here, the iModulon name is given in large font. Below, several descriptors are given, including the biological function and category of iModulon. If the iModulon is found to map to a known regulator, then the "Regulated by" descriptor will be followed by the regulator name. If available, the regulator name will appear as a link to the appropriate database (e.g. RegulonDB).

The gene table lists the genes in an iModulon. Clicking a row will take you to a relevant database (e.g. Ecocyc) for that gene. This table is scrollable in both directions. Clicking the arrows in the header sorts the contents by the given feature, and right clicking on the header allows columns to be moved to the right end or hidden. This table is also downloadable from the "Download" dropdown menu in the site header.

For each statistically-determined signal, each gene has a "weight" that represents its importance towards the signal. Genes with weights that occur above a determined threshold (outside the vertical lines) are considered to be a part of the iModulon. Note that the y-axis has a logarithmic scale. Hover over the bars to see the associated genes. If the iModulon has a regulator enrichment, the genes in the regulon will be shown in color. Click the elements in the legend to hide or show the associated bars.

Similar to the gene histogram, the gene weight scatter plot shows the weight of each gene towards the signal. In this figure, the gene weights are plotted against the gene expression in the control condition. They are colored by category. Again, genes outside the horizontal lines are in the iModulon – click on them to access their entries in a relevant database. Gene names, values, and categories can be displayed by hovering over each point.

The activity bar graph shows the relative activity level of the iModulon across all the experimental samples included in the dataset. The plot is divided by the source study for the dataset, and clicking a bar will take you to the associated publication. The black points represent each biological replicate for the sample, and the blue bars represent the averaged activity from the biological replicates. Hovering over the data shows the sample name, the activity value, and some associated metadata. The menu in the top right of the figure includes additional options to download the figure or underlying data. 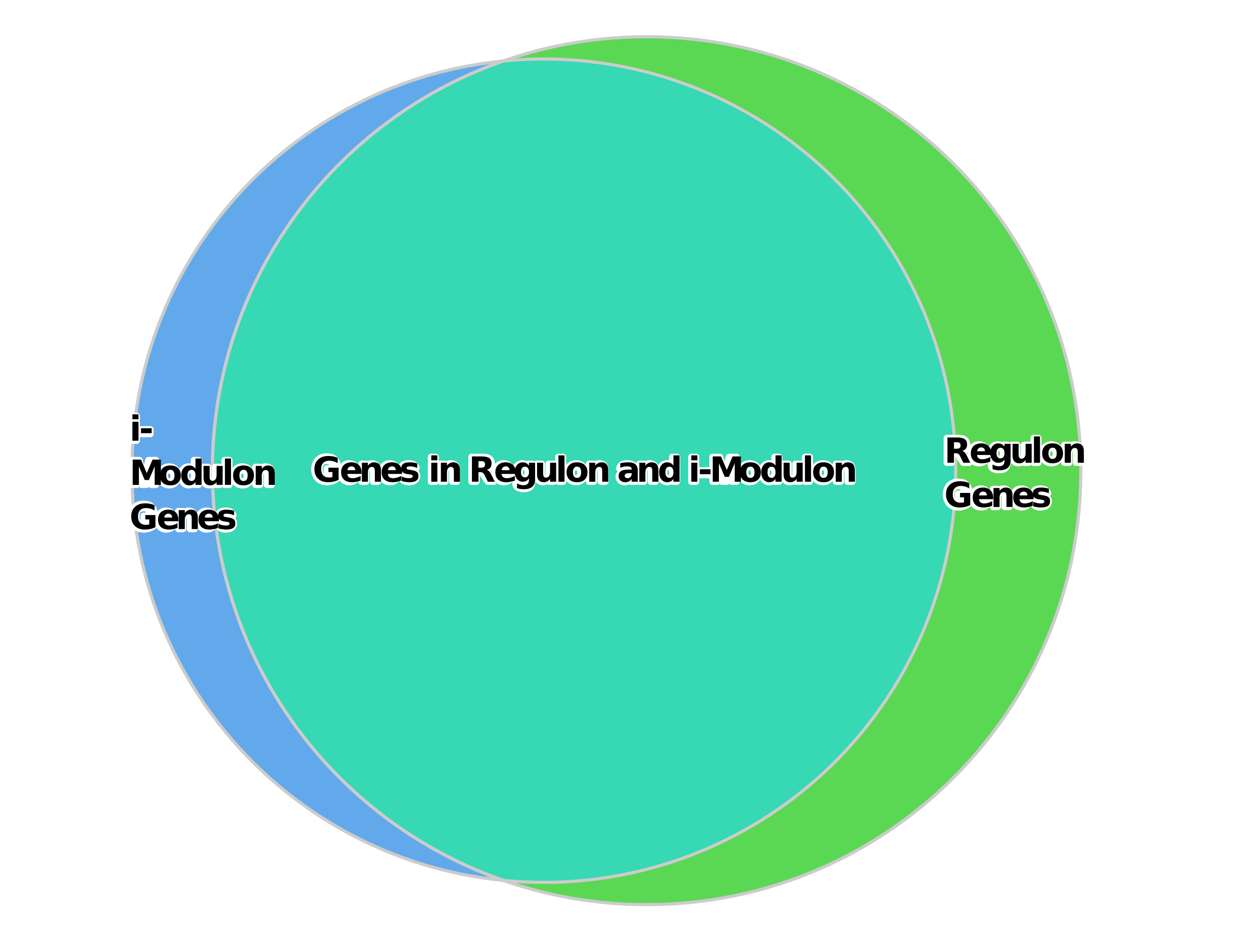 If the iModulon is mapped to a regulator, the venn diagram shows the overlap between the genes in the iModulon and the literature-derived regulon. On the dashboard page, you can hover over each part of the venn diagram to see the number of genes and gene names associated with each group in the diagram. 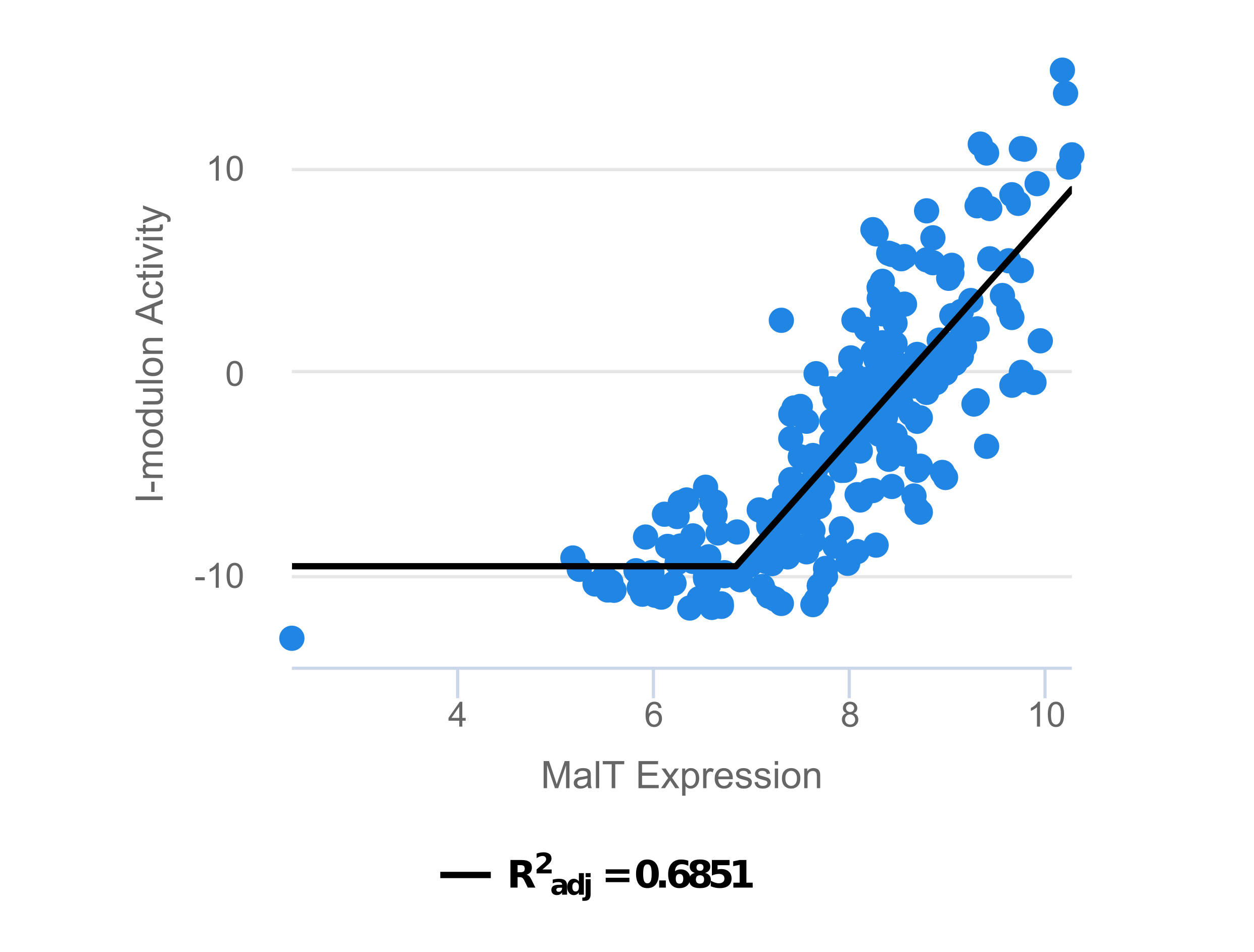 Please cite the iModulonDB paper as well as the paper(s) associated with the organism(s) of interest.

For questions, comments, feedback, or to collaborate with us, please send an email to Kevin Rychel (imodulondb@ucsd.edu).

For more information on the Systems Biology Research Group (SBRG) at the University of California, San Diego, please see our website here.